While Aba Thembu king Dalindyebo continues to demand a special treatment a growing number of people are starting to ask key questions around the royal family and their relevance in this day and age. Added to this interest is the question around the political powers and influence the royal family play influencing the outcome of national or local elections?

It is this political influence that other traditional institutions such as the Congress of traditional leaders are banking on for demanding a presidential pardon for king Dalindyebo who has been sentenced for 12 years.

The sentence relates to his conviction of arson, kidnapping, defeating the ends of justice and assault with intent to cause grievous bodily harm. A sentence that he has gone to every court to try and overturn. All attempts have produced nothing but frustrations as the sentence still stands. This frustration saw the king going on hunger strike and his supporters threaten a boycott of local elections.

Dalindyebo and his supporters argue that his pardon should be based on the fact that as a king, he owns his subjects and has the right to beat or even kill those who do not obey his wishes. Dalindyebo is not the only king, chief or queen in the world who think that history puts them in a special world and they should be given special privileges.

Queen Elizabeth and her family have never worked in their lives but have accumulated wealth that rates them among Forbes richest people in the world. Since most African traditional leaders reject homosexuals, it is more likely that they will not promote such rights under the proposed bill, thus gays rights will be under threat. These are stories that people were relating during the public hearings on the proposed traditional courts bill.

It is surprising that even after so many outcries by people living in the rural areas and civil society about the proposed bill, the ANC government wants to go ahead with the apartheid era tribal boundaries.

These former homelands are being turned into zones of social control to manage the social crisis of reproduction and to maintain loyal electoral support for the ANC government. In these zones, the ANC scored at least 75% of the vote in the 2014 national elections.

Such actions are a real reversal of what the ANC as a liberation movement fought against. Thus a big sign that as support in the urban areas dwindles, the ruling party can easily use same tactic that ZANU PF adopted when its power was threatened by MDC. At that stage in 2002 ZANU PF adopted land grab to sway support in rural areas.

Where royal families do not enjoy the support of the people they should be abolished and replaced with only democratic institutes that are accountable and elected by majority of people. Rural communities have fought back and will continue to do so.

The Amadiba rural community struggle against Australian mining company is one of many cases where fightbacks against injustice continue. It is through such fightbacks that we can establish working class controlled democratic councils that can be accountable and controlled from below. 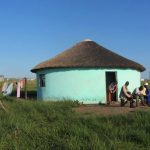