On Friday 8 April, Over 300 residents from Xolobeni and surrounding villages in the coastal Amadiba community came to meet a delegation of nine from the Minister of Mineral Resources, from DMR in Pretoria and the EC, as well as the Mayor of Mbizana. In the delegation was the DG, the Dep DG and the advisor to the Minister. No taxis were provided. People had walked far. Thabiso Mbhense attended from LRC. The meeting had to move outside the hall of the coastal Amadiba traditional authority.

The delegation from the Minister and DMR tried to ask why the community doesn’t want mining. They said that this was the purpose of the meeting and that the Minister was “very new”. They had read in the papers that there were problems. The response was that all arguments against mining are in the objections filed by our lawyers.

“From this meeting you should only take back: We don’t want mining!”

“If you wants peace, they should stop this and reject the license. You can grant the license if you like, but it won’t work. It will lead to more bloodshed.”

Nonhle Mbuthuma: “The DMR have all arguments and facts. You were here also in July. You said the same thing, as if you don’t know anything. Next day, you went to Estuary hotel and spoke with Xolco. Why did you not bring them here, to discuss with us? You are participating in dividing us.”

The dignitaries argued that the license had not been given. Many explained that everyone know this.

“Now, we tell you: Listen to us. Stop this process. It is killing the community. Tell the minister to reject the mining application. He has all the arguments.”

The chief advisor said he would tell this to the Minister, but that the Minister takes the decision.

Coastal Amadiba Ward Councillor Nokwamkela: “Bazooka follows others. How many should be killed?”

AmaMpondo Crown Princess Wesizwe Sigcau attended together with a delegation of chiefs from the Qaukeni royal house;

“No fake king and no chief can sign paper and sell the land to the Australians. This is not the land of a chief. This is ancestral land of the people. A king or a chief does not own the land. He is a servant of the people.”

The Princess asked: “Why don’t the Department of Agriculture come here? We have whole countries living from agriculture and tourism. Why cannot this rich land be developed? It already feeds the community. Pondoland can feed a lot of people in the whole of South Africa. Should the land instead be destroyed so that 200 people can get R4000 rand per month for 20 years?”

“This is the 10th largest deposit of titanium in the world. But Australia has the third largest deposit. Why don’t they mine for titanium there? It is because they have a government that is strict and that never would accept to abuse the people.”

Many started to cry when asking: “How many times must we say no to mining and tell you that mining is killing us?”

The murder of Bazooka, chair of ACC, and the police

The dignitaries advised the community to trust the police and the investigation of the murder of Bazooka Radebe. Many responded:

“We have no trust in the police. They come at night and refuse to identify themselves. What have they done about those who have been killed before and the violence against us now? We trust no one now, we only trust ourselves.”

There have been no arrests after the attack on journalists and their local guides 2 April, after Bazooka’s funeral. The attackers are identified and known.

“This government is not a good listener. They are prepared to sacrifice the lives of South Africans to please the big companies. The whole of South Africa is suffering because of this.” 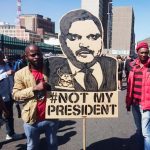