State of the Nation Address and the EFF

In the National Assembly on 12 February, at the opening of parliament, MPs from the Economic Freedom Fighters (EFF) were violently ejected from the House by riot police. This happened because they asked a question during President Jacob Zuma’s state of the nation speech. Seven MPs were injured, one woman seriously, as ANC members clapped and jeered an open attack on democracy.

Then the Democratic Alliance (DA) walked out, joined by other opposition MPs. Jacob Zuma resumed his speech with a giggle, not once mentioning the ongoing xenophobic attacks on black non-South Africans in our townships, or the appalling joblessness of our youth, the enduring low wages of black workers, the homelessness of hundreds of thousands. Nor did he mention the Marikana massacre, or the R246 million stolen from state funds for his private residence in Nkandla, two issues that the EFF are keen to get answers on.

Just like the Marikana massacre, the move to silence the EFF was premeditated. Jacob Zuma spent the best part of 2014 ducking parliament in order to avoid embarrassing direct questions from the EFF that have exposed the ANC’s lack of regard for democratic processes. Earlier in the day, Cape Town was turned into a military zone under lock down, with heavily armed police vehicles and snipers lining key roadways.

A few hours before the opening of parliament, DA supporters were attacked by riot police for protesting against the handling of the energy crisis. They were water cannoned and two senior MPs were arrested. A similar protest around the corner, of ANC members holding placards, was left untouched. It’s one law for the ruling and one for everybody else.

As journalists filed into the National Assembly on Thursday night, they found that cellular network signal had been jammed. This flouting of parliamentary democracy prompted a protest by journalists and opposition parties shouting “bring back our signal.” The Chair and Speaker of the House, Thandi Modise and Baleka Mbete, both senior ANC politicians loyal to the president, claimed they had no knowledge of this but when opposition MPs refused to proceed without the signal being switched back on, it miraculously was.

The EFF, formed in 2013, is the most significant left split from the ANC since 1994 and a product of the crisis of enduring inequality in South Africa. The party’s president, Julius Malema, once leader of the ANC Youth League, was the only politician to visit Marikana immediately after the massacre and to openly support the mineworkers’ struggle for a living wage.

The party’s demand for ‘economic freedom in our lifetime’, and commitment to nationalisation of mines, land redistribution without compensation, support for LGBTI rights and opposition to xenophobia, has resonated with many young black South Africans, many of whom are marginalised and welcome the EFF’s brand of anti-establishment politics. In recent months, EFF local structures have actively organised and supported land occupations and the building of shacks, that has seen violent clashes with police.

In the 2014 election, the Fighters won 7% of the national vote and outright electoral wards in and around Marikana. The EFF’s continued uncompromising stance in the national parliament regarding state corruption, parliamentary rules and insistence that MPs wear workers’ uniforms – is seeing their popularity rise not just amongst youth, but amongst black middle-class voters who have lost faith with the ruling alliance and are attracted by the EFF’s merging of political traditions, of Marxist Leninism with Black Consciousness.

The newly formed United Front, initiated by the National Union of Metalworkers (NUMSA), has recently called for a national day of action on March 21, against police brutality and this will be supported by the EFF. Both EFF and the united front represent those who see the need for strong, independent organisations that represents the interests of the poor and oppressed.

The EFF and the united front’s inability to come together at leadership level, due to Numsa’s questioning of the EFF’s left credentials as well as Numsa’s exploration of a new political party that would contest elections, is weakening the potential for a mass fightback. However, on the ground, in the townships, workplaces and informal settlements, it is the case that EFF members and united front supporters who want to fight often find themselves thrown together as they take on local demands.

The rapidity at which democracy is breaking down demands a speedy unity of all those who want to take a stand in the coming months After all, in January, Jacob Zuma told business leaders at the World Economic Forum in Davos that South Africa is open for business. If this doesn’t mean more attacks on the working class, what does?

UNITED FRONT BUDGET DAY DEMONSTRATIONS GETTING ONTO THE STREETSUncategorized 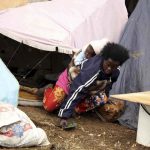