State and corruption; Can workers perform a political exorcism?

Adjure te spiritus requissime per Deum omnipotentem(I adjure thee, most evil spirit by almighty God). You are more likely to encounter this phrase when an exorcism is being performed by a priest to cast out evil spirits. The evil spirit that has possessed the ruling party referred to here is the rampant corruption that continues to ‘possess’ the political class in cahoots with the emerging bourgeoisie and the ruling class. It eats deep into their souls and haunts them in every institution of the state. We are living in the age of self-destruction by capitalism’s malevolent spirits and greed as its greatest motivator: a culture founded on corporate wealth accumulation is seamlessly transforming into one founded on individual enrichment.

In announcing the Covid-19 relief measures, Ramaphosa assured the nation that the public finances would be accounted for, ensuring us that each cent will be accounted for. But how could he not know that already the devil had already possessed those in positions of power? Procurement deals for PPE that were intended for the health department are now at the center of corruption during this pandemic.

These tenders were awarded to those with close links to the ruling party and those close to the president himself. About R2.2 billion is estimated to have been looted and the rot seems to go deeper. The deep-rooted corruption practices are taking place in the midst of increasing poverty, unemployment, femicide and high death rates caused by the pandemic. This just exposes how the fabric of our system is woven around corruption as well as how pivotal corruption has become to the emerging ruling elite and the ruling class wealth concentration.

However, the ruling party wants us to believe that it will fight corruption. The latest announcement by the president to establish the ministerial committee to investigate the alleged corruption in the state indicated that mission to cast out the evil spirit. It is hard to be convinced that the committee set up to investigate Covid-19 tender corruption will produce evidence that will incriminate those that have benefitted from corruption.

Moreover, some of the loud cry has been that corruption does not represent any body of the ruling party.

The setting up of committees and commissions should be seen as a practice of self-flagellation by the ruling party to seek salvation and cast out evil spirits that possess them. But they are just like slave-owners that punished and killed slaves all week long and yet on Sunday offered tithes to the church as a form of repentance.

Dualism religions argue that the universe is a battleground between good and evil. This then means that the evil (corruption) is an independent power that is not subordinate to the good God (efficient governance). In essence, the ANC wants us to believe that it needs our help to fight the corruption possessing them just like any other church that assembles every once in a week to join Jesus in the fight against the devil. However, we are performing a political exorcism to cast out evil spirits that come from within the ruling party’s politics in an era of sharpened global competition.

It is true that corruption came before democracy in South Africa and the world. South African capital is in fact inseparable from corruption. It is an evil which is built into the very nature of the capitalist economic system: the former cannot exist without the latter.

‘Fraudulent’ and ‘theft’ point to the link between capitalism and corruption; theft from labour is the very foundation of the capitalist system, which then sets the agenda for the capitalist approach to legally steal what workers produce. And business under apartheid was not shy of buying politicians to advance their own interests.

To enrich itself, the emerging black ruling class gained only the ready-made machinery of apartheid capitalist system, but its political arm in the state took no steps to increase their control over the companies ruling the economy.

The ANC inherited a decaying racial capitalist system which had no other alternative for its survival but to assimilate the black emerging bourgeoisie. Unlike many liberation movements, which nationalized most key sectors of the economy after liberation, the ANC chose a different path, which was to form alliance with the apartheid corporations. As a result, the new bourgeoisie found little or no space to break into the market and accumulate on an equal footing with the established corporations.

It is in this context that the state and the ruling party itself became the cash cow for enrichment of well-connected individuals and networks in the ruling party. But the model of corrupt personal enrichment was set up during the transition via a totally legal example.

Ramaphosa himself made some of the biggest deals with the devils. After 1994, he was given massive shares in several private entities, particularly mining companies, making him a billionaire over-night. The apartheid corporations found an ally in him, and through him to the ANC, to keep their grip tightly onto economic power. What was key about this alliance was that it could offer protection to the dying old class. It was a resurrection that did not require any miracle, but just like Judas who betrayed Jesus; all what was needed was to betray the strong workers movement that defeated apartheid. These shares, also given to a handful of other prominent members of the liberation movement, would have been corrupting even if they had been brought under collective control; remaining in individual hands, these shares sent a loud message that being in the movement was a route to personal wealth, and at the same time transformed those individuals into a conduit between the new government and the old corporates – with devastating consequences for the miners of Marikana.

The ANC could not re-invent the state after the pressure died out from the mass workers movement. Workers were at the fore-front at defeating apartheid. The subjugation of trade union bureaucracy into the ranks of the ANC signaled the end of that wave of workers’ power in this country. Again, the trade-union bureaucracy saw the ANC as the agent of change, and increasingly their jobs in the unions were treated just as jobs.

This sad story is not a case of the spirit of capitalism invading the ANC – rather, it represents the growth of the nationalist politics at the heart of the ANC, which aimed to battle apartheid without taking up the ‘social’ question of who controls the economy.

Corruption is not an independent force or a spirit that possess the ANC. However, corruption forms a natural outgrowth of the capitalist system. Capitalism cannot be either ‘good nor evil’ because it forms part of the fabric of its system. The state forms part of capital and under contemporary system represents the interests of capitalism. Under capitalism, no state is immune to corruption. The demons live within the heart of this soul. Therefore, our political exorcism should then be directed at attacking the evil that has possessed the body. And, just like a priest performing exorcism the host (capitalism) is beyond salvation and has to perish. 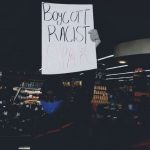 Workers and community members stand together to fight racism, exploitation, and discrimination at a Nigel SparLabor and Unions, Politics, South Africa 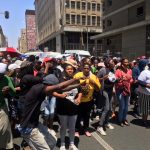