Workers and community members stand together to fight racism, exploitation, and discrimination at a Nigel Spar

On Saturday 25th July Keep Left together with Spar Angelo labour desk, Coronavirus campaign had a demonstration at Nigel Super-Spar. The demonstration was held on the backdrop of encouraging the larger members of the community to boycott the shop. Supporting Super-Spar at Nigel would mean contributing to the perpetuating of workers exploitation, supporting a racist boss and undermining the Labour Relations Act of the country.

The Super-Spar owner (Savvas Georgiou) is notorious for under-paying workers and threatening workers with dismissal if they organize themselves or join a union against his unfair labour practises.

Black workers are subjected to racism daily at the shop. One worker, who chose to remain anonymous fearing victimisation had this to say about the work-place, “black workers are forced to work in difficult conditions in the store. Work long hours without being paid for the hours worked and are relegated to subordinate posts such as cleaners, packers and work in the freezing refrigerators. While on the other hand, white workers are reserved managerial posts, front- desk tellers, and are made to occupy high paying job compared to their fellow black colleagues.”

As with many other bosses that sees workers as a source to accumulate more profit at lesser expenses. Savvas is no different, he sees workers as cheap labour that can be underpaid and exploited at a much cheaper rate.

One pay-slip that Keep Left has seen was of a worker being paid R1250pm. Which is R2250 less the amount of the government national minimum wage that has been effective over a year ago.

Savvas is no different from any other bosses. His a tip of an iceberg of how the broader capital system considers workers as cheap commodity to exploit its labour. It is a practise that is deeply rooted in the capitalist wealth accumulation which is to extract profit at a much cheaper rate.

Again, the government’s inadequacy to fully implement and enforce laws labour to protect workers. Makes it easier for culprits such as Savvas to flout labour laws and get away with exploiting workers.

With the economy bleeding and more workers losing their jobs daily. It cannot be left to the government to fight for workers jobs because the state is the mouth-piece of capital interests.

The direct intervention by workers and community member thus has meant that the honey-moon phase that Savvas has enjoyed is now coming to an end. Community members have a couple of times disrupted the Super-Spar. Demanding that workers be paid a living wage of R6500pm, Spar franchisee take control of the shop and relieve Savvas from ownership of the shop, all job opportunity be reserved for all workers regardless of color.

At the moment workers at the shop are forced to operate in covert activities in order to organize themselves collectively. This is done so they could protect their jobs or not get victimized by their boss.

To rally behind workers, community members have planned a bigger demonstration on the 5th of September hoping to bring to an end the super-exploitation that workers are subjected to.

Lastly, the build-up towards the mobilisation for the 5th of September event will be weekly pickets at the shop and the establishment of a workers committee that will oversee the success of the campaign.

It can only be the unity of the working class that can disrupt the wheel of exploitation. 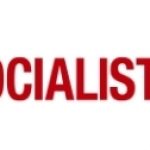 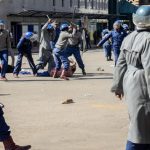