Historic US rebellion is an inspiring challenge to the system

The magnificent uprising taking place across the US is historic. Mass demonstrations following the police murder of George Floyd have now continued for more than two weeks. The rebellion is the most significant in decades.

News media organisations have reported demonstrations in 806 towns and cities across all 50 states according to USA Today. There have also been protests in the territories of Guam, Puerto Rica and the Virgin Islands.

The Washington Post newspaper carried out a major analysis of the protests.

It found, “Far more places have held protests already than held Women’s Marches in January 2017. That march occurred in 650 locations.”

It said people had held protests in “hundreds of smaller, lesser-known towns and cities”.

Its most closely researched ­example was Pennsylvania.

Here, it found “multiracial protests led by young local black activists joined by white and Latino young people in ways and numbers they have never seen before”.

The paper concluded, “The United States rarely has protests in this combination of size, intensity and frequency.

“It usually has big protests or sustained protests, but not both.”

The movement has exposed the lengths the state will go to in order to keep ordinary people down.

He told Socialist Worker, “A group of peaceful protesters made their way onto the road and started marching down the highway.

“All of a sudden police officers started firing pepper spray and tear gas at us.

“People’s only escape option was up a hill and over an eight-foot fence.” Elias’s horrific video shows people screaming, “I can’t breathe,” as their lungs fill with tear gas.

He said protests in Pennsylvania have continued to grow despite the brutality of the cops.

And he added that police violence has made more people question the purpose of the police.

Elias said, “The whole point of the police is to ‘protect and serve’ right?

“But who they protecting and serving is really coming into ­question now.”

“They are peaceful with most chants being, Say his name—George Floyd, Black Lives Matter, and, No justice—no peace,” they said.

“The pandemic has probably stopped some people from going out, understandably.

“But as time goes on, more and more cannot stand the injustice.”

The protester added that people are angry about more than just the police. “The US officially has an unemployment rate well over 20 percent,” they said.

“The real rate is probably worse. Youth unemployment is probably over 50 percent and nearly three quarters of Americans lived ­paycheck to paycheck before this.”

The movement is an inspiration and shows the ability of ordinary people to organise and fight back.

Everyone should support it.

Police on the rampage as over 12,000 are arrested

Cops shot and killed an unarmed man in the parking lot of a Walgreens pharmacy in Vallejo, California, last Tuesday, during protests against police brutality.

Sean Monterrosa, a 22 year old resident of Vallejo, was gunned down by officers from inside an unmarked police cruiser. Sean was on his knees with his arms in the air when he was shot.

Officers claimed they feared an object in his pocket—which turned out to be a hammer—was a gun.

And 57 officers resigned from the city of Buffalo’s Emergency Response Team, a special squad formed to respond to riots.

They resigned in solidarity with two cops who were suspended after a video showed them assaulting 75 year old peace activist Martin Gugino. Martin was hospitalised with a head injury.

More than 12,000 people have been arrested in the US during the protests against police violence. When the figure was 10,000 the Associated Press (AP) news agency reported that one quarter of the arrests had been made in Los Angeles.

Large numbers of people had also been arrested in New York City, Dallas and Philadelphia.

But AP analysed court records, employment histories, social media posts and other sources of information for 217 people arrested in Minneapolis and Washington DC. Rather than being “outside agitators”, more than 85 percent of those arrested by police were local residents.

Of those charged with such offences as curfew violations, rioting and failure to obey law enforcement, only a handful appeared to have any affiliation with organised groups.

Repression has failed to break resistance. Instead, the protests have grown.

The protests are popular. Never before in the history of modern polling have Americans expressed such widespread agreement that racial discrimination plays a role in policing—and in wider society.

In a Monmouth University poll released last week, 76 percent of Americans—including 71 percent of white people—called racism “a big problem” in the US. This is a 26 percent increase since 2015.

Some 57 percent of Americans in the poll said demonstrators’ anger was fully justified, and another 21 percent called it somewhat justified.

The Monmouth poll and another released last week by CBS News showed changes to how people see the cops.

Some 57 percent of Americans said police officers were generally more likely to treat black people unfairly than to mistreat white people. And in both surveys, about half of white people said so.

This was a drastic change, particularly for white Americans.

Racist statues get a kicking

Protesters in the Southern US states are attacking, tearing down or demanding the removal of Confederate statues and symbols.

The Confederate states were pro-slavery during the 1861-5 Civil War. A monument to Confederate General Williams Carter Wickham in Richmond, Virginia, was toppled by demonstrators last Saturday night.

More than a dozen statues and symbols of the Confederacy have been damaged or defaced in recent days in at least six states.

Authorities removed the Confederate Soldiers and Sailors monument in Birmingham, Alabama after it became the target of furious protesters last week.

All the racist monuments across the US should go. 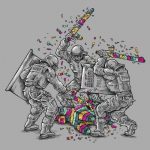 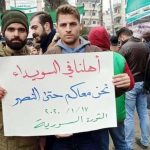 Stand in solidarity with the Syrian people against dictatorship, foreign intervention and racism – statementInternational, Middle East