Bolivia’s president Evo Morales has been forced out by a coup. It was orchestrated by the army and police—and backed by Donald Trump and the US.

His demise after nearly 14 years as president means the removal of the last of the reformist “pink tide” governments in Latin America.

“There has been a coup,” Morales said as he announced his resignation. “My sin is to be ­indigenous, a trade unionist and a coca grower.”

Last month Morales claimed to have won a slim ­majority in presidential elections. But the Organisation of American States called the result ­“statistically improbable” and demanded another election.

Morales offered another vote but the right rejected this and the police and army told him to go.

Earlier some police officers abandoned their posts, including those guarding the ­presidential palace.

Under the rule of his Movement for Socialism party, poverty rates have almost halved while Bolivia’s gross domestic product has quadrupled off the back of gas and mineral exports.

However, there is still ­widespread poverty with a fifth of the ­population malnourished.

Morales was part of a movement for indigenous rights and against the neoliberalism that swept Latin America in the early 2000s.

He promised to “nationalise everything” but left much of private industry untouched.

His government intensified the extraction of Bolivia’s own natural resources.

Some social movements previously allied to Morales ­abandoned him as he grew closer to agribusiness interests and energy multinationals.

The last year has seen ­long-­running strikes by doctors and miners. And he ignored defeat in a 2016 referendum on whether he should be allowed to seek a fourth term. This explains why initially there was little popular resistance as he was forced out.

However, on Monday the Federation of Neighbourhood Boards (Fejuve) of El Alto called for resistance. This powerful social organisation was prominent in social struggles that preceded the arrival of Morales as president.

Resistance from below can beat the coup. 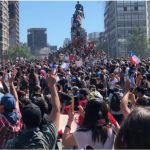